The DJI Mavic Pro was DJI’s flagship drone that has been around for a long time. It was first released in 2016, but I can still see people flying it around today.

Many people have been experiencing problems with the DJI Mavic Pro battery not charging lately and in this article, we are going to look at the reasons and fix it.

The most common reason for the DJI Mavic Pro not charging is that it was stored for a long time without intermittent charging, and now it is completely depleted. You will have to leave it on charge for a full day to get it out of hibernation.

Let’s do comprehensive troubleshooting to know the exact cause and then fix it so that you can fly your Mavic Pro again.

Your DJI Mavic Pro battery might not charge for various reasons. To find out what the exact cause is, you will have to go through a step by step troubleshooting method.

Below are eight troubleshooting steps to determine the cause of malfunction and fix it.

Since the Mavic Pro is an old model, most people have their additional batteries on shelf for a long time. Some might even forget if they even had a battery under one day they find ti.

If you are using your battery after a long time, it might be fully depleted during its time on the shelf.

LiPo batteries are very sensitive to low and high charges. They will degrade permanently if you store them for a long time in either state. That’s just the physics of it.

The DJI smart batteries (like the ones in your Mavic Pro) have internal smart circuitry to protect the cells from high and low-charge statuses. But that feature, too, has limitations.

However, most people keep their spare batteries on the shelf and forget about them for years.

During such a prolonged time, the battery will discharge to below critical level, and its cell chemistry is destroyed.

When that happens, it’s almost impossible to revive your battery.

If you are picking up such a battery that has been on the shelf for more than a year, chances are it will not wake up. But you can still give it a shot before throwing it away.

I talked to the DJI support team, and they told me that my batteries are dead due to incorrect storage for a prolonged time and that I should buy new batteries.

I also searched the forums to see if anyone has any unofficial “hack” that can be used to revive dead batteries. I did find a few ways people have been able to revive such batteries.

Although these methods worked for some and not for others, you can still try and see if you can revive your batteries.

If none of the above method work, you can assume that your battery is dead beyond repair in other words FUBAR.

But if you are a DIY person, you can carefully take the battery apart and check the three cells inside.

One user who did this found out that 1 out of 3 cells was swollen, and the rest of the two cells were fine. He just disconnected the swollen cell terminals, and the battery started charging.

Since the cells are connected in parallel, you will get same voltage but the capacity will decrease by 33%.

When your battery is not in use for more than 10 days, the intelligent flight circuit inside your battery will put it in hibernation mode to slow down the discharge.

The battery circuit will not draw any current in hibernation mode to prevent over-discharge.

Especially during shipment, all DJI batteries are put in hibernation mode. This helps prevent over-discharge during long shipments.

When a battery is in hibernation mode, you won’t see any LED flashing when you press the power button. It might seem pretty much dead to you.

But it is not dead. It’s just sleeping.

To get the battery out of hibernation mode, you have to connect it to the charger and leave it for a good 6-8 hours to wake up.

You might not even see any charging activity on the battery during this time. But do not remove it and let it be for at least 8 hours.

Once out of hibernation mode, it will wake up and start charging normally.

Another reason for an unresponsive battery is outdated firmware. If your battery has some power left to turn the drone ON but is not charging, this might be the reason.

The solution is pretty simple. Put your battery inside the drone, connect your drone to your phone and see if it has a firmware update available. If it prompts you for the update, update it.

But you can’t use this method if the battery is completely dead. That’s why it is a good idea to update your firmware as soon as you get a prompt for it in the Fly app.

4. Charger is not providing enough current

Using the DJI official charger for DJI Mavic Pro and other drones is always recommended. But if you use a third-party charger to try to wake up your battery, this could be the problem.

The charger you are using may be either damaged or not rated for the high current high voltage required for DJI Mavic Pro battery.

If you have the official DJI Mavic Pro charger, use that else, try using a compatible charger that can provide a 3A current at 5V to your drone.

While you are at it, also thoroughly inspect the power cable that connects the charger to the wall and the charging cable that is connected to the charger and connects to your battery. Look for any signs of visible damage, burns or cuts.

6. Physical damage to drone or battery

If you have crashed your drone and have physically damaged the drone or the battery, that can also be why your DJI Mavic Pro is not charging.

Carefully inspect your drone and try to assess the extent of the damage. If you see clear signs of deformation on the battery pack, I would recommend disposing it of safely as it is not safe to use anymore.

Even if you don’t see clear signs of damage on the body of the drone or the battery, there might be damage to the internal circuitry.

If your drone is under warranty, you can contact DJI else seek out a local repair shop that can have a look at your drone.

7. Temperature too high or too low

Charging a battery that is too hot or too cold is a bad idea. The cell chemistry is unpredictable at extreme temperatures and can lead to permanent damage.

To avoid this, there are temperature sensors built into your battery pack.

If you try to charge outside this range, your battery will refuse to charge.

If you check the DJI Mavic Pro LED status table, you will see that the last LED blinking indicates an extreme temperature range.

Some people try to charge their battery right after a flying session when it is all heated up. That’s a bad practice and should be avoided.

Always charge your battery when it is rested for a few hours after flying.

Similarly, if you are living in extremely cold region where the average temperature drops below zero degree C, your battery will be very cold in the morning and won’t charge.

Put the battery in warm room for a few hours and try again.

Lastly, check your charging port terminals if your battery is not responding to the charger. Sometimes, it’s just dirt that prevents good surface contact between the terminals.

If your battery has been through crashes, chances are that it has picked up dirt and a thorough cleaning is required.

You can use a connector cleaner like DeoxIT Gold to clean the connector surfaces and try charging again.

If you try all the above solutions but still can’t revive your dead battery, it’s perhaps time to order a new one from DJI or their Amazon store. 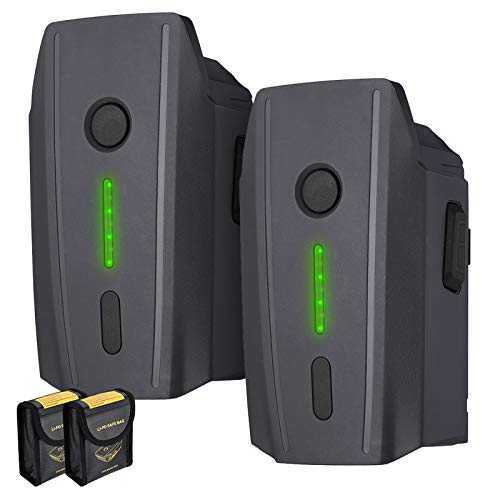 Batteries are critical components and need great care. It is always best to follow the manufacturer’s recommendation, especially when storing your batteries properly.

I hope this guide was helpful. If any of the above methods helped you revive your battery, do mention it in the comments and let other people know too.